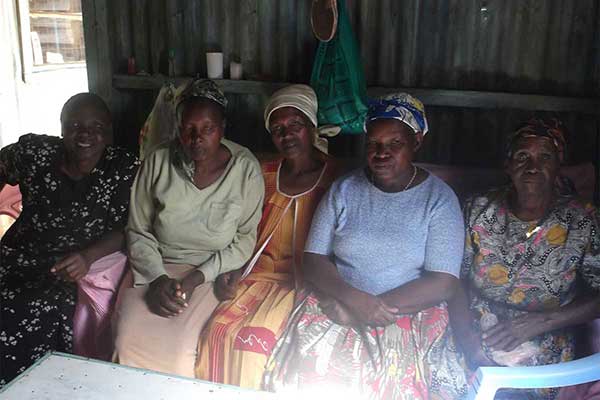 Founded in 2013 by Margaret, a breast cancer survivor, the Happy Grandmothers Group has 10 members all of whom are grandmothers looking after orphaned children, mostly their own grandchildren. Many of the children lost their parents because of HIV/AIDS; presenting an extra challenge as a lot of the children are HIV+ themselves.

Currently the main role of the group is support, providing a place for women to discuss the problems they face and give each other advice, but they are looking for ways to support themselves financially. This has been harder than they hoped it would be – because of the times they grew up in.

Only Margaret speaks English and some of the members only have a small amount of Swahili which limits their ability to work or gain the skills that would help them create their own income.

The group has faced many disappointments – for example, last year (2014) the women were promised a batch of chicks so they came together and found the money to build a chicken coop, but the organisation who had promised to help them failed to deliver and now the coop stands as a testament to unfulfilled plans. However, they face this with unswerving optimism, they are sure that help will arrive soon and are undertaking training with Compassion CBO to increase their understanding of business with the hopes of coming up with new ways of supporting themselves.

Compassion CBO hopes to be able to help them with some chicks, as soon as the Compassion chicken project gets off the ground – and once that is set in motion, they next plan to come together to buy a goat, with the milk providing the orphans with a source of nutrition and the women with a little income.