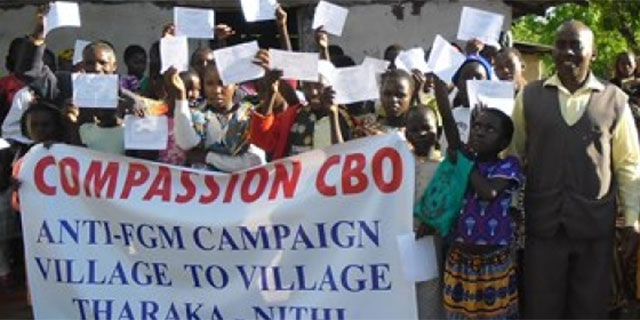 The grant was announced by AmplifyChange on Saturday 6th February 2016, the International Day of Zero Tolerance for Female Genital Mutilation:

‘On the International Day of Zero Tolerance for Female Genital Mutilation, we are proud to introduce our Opportunity grantees, Compassion CBO Anti-FGM hotlines, in Kenya. Evanson Njeru, Founder of Compassion CBO, introduces their project:

“We seek to engage the whole community to end FGM, through working with men and elders at separate meetings and holding anti-FGM seminars for women and girls to educate them on the risks of FGM.

“We wish to end FGM by convincing people of its dangers in a well thought out and thorough manner that will change attitudes in the long term. By setting up representatives with mobile phones and advertising the numbers as an anti-FGM hotline, we would be able to help girls and women access information, receive assistance in cases of coercion or when FGM has been carried out, without these women having to face potentially hostile authority figures or having any stigma attached to themselves.

“We also seek to be able to collect accurate information on the occurrence of FGM and use this information to lobby local and national leaders to create more effective policies for combating FGM.

“FGM is disempowering for women as it means that girls lose control over what happens to their bodies, often with dire physical and mental consequences. By campaigning to end the practice we are seeking to put women on an equal footing within society and allow them to regain ownership of their bodies. By running seminars for women and girls and including men, in separate meetings, we hope to ensure that FGM is no longer seen as a women’s issue but recognised as something that the whole community needs to work together to end. As well as allowing us to ensure that cases of FGM are reported to the authorities, a hotline will also help to promote gender equality by allowing us to collect data on true numbers of cases, as many people will not fear to go to the Compassion Anti-FGM Hotlines we will be able to advocate for them and also pass on the information to local and National government to ensure that the scale of the problem is known and addressed.” ‘