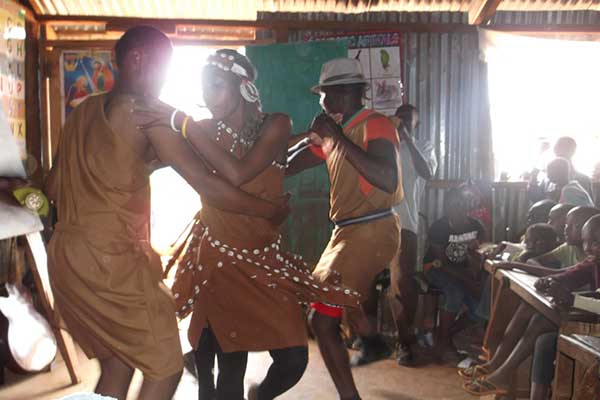 Formed in 2010 the Karukira Mwomboko Dancers is a group of 10 dancers who use traditional Kikuyu dance, songs drama and comedy to educate people about the dangers of FGM, tribalism and HIV/AIDS while stressing the positive aspects of Kikuyu culture.

They perform at school, weddings, male circumcision ceremonies, churches, birthday parties and government meetings in Kenya and other East African countries. To ensure that they can reach as many people as possible they will learn other local languages and dances for instance Luo and Kakamba to ensure that the entire audience are engaged.

Making sure that their message reaches as many people as possible is vital, when they perform in public many people will come to see the dances even though they aren’t aware of the message at the beginning but they leave having been entertained and taught about the social issue being performed. At schools the group makes sure that they teach the children the songs, with the meanings weaved into the lyrics, the children then pass it on to new pupils every year ensuring that message continues to be part of the lives of many more than just the original audience.

They also take in street children to the group, house them, feed them and help them give up drugs and other dangerous behaviour if necessary before training them in dance and music to help provide them with a livelihood that will keep them off the street permanently.

After sending a video of their performance in Githogoro for Compassion CBO, to local television networks they were featured of Kenya national television.

However, funding is a big issue for the group, not all the members can afford to volunteer and cover all their costs when travelling long distances, especially when they get to rural areas and find that there is so little transport that the costs are extortionate.

They are also looking at how they can afford to buy a PA system so that they can get their message to all the people who attend large functions.

The final problem they face is hostility, there are times when their message is unpopular, for example there are many rural communities who feel that campaigning against FGM is undermining the local culture.